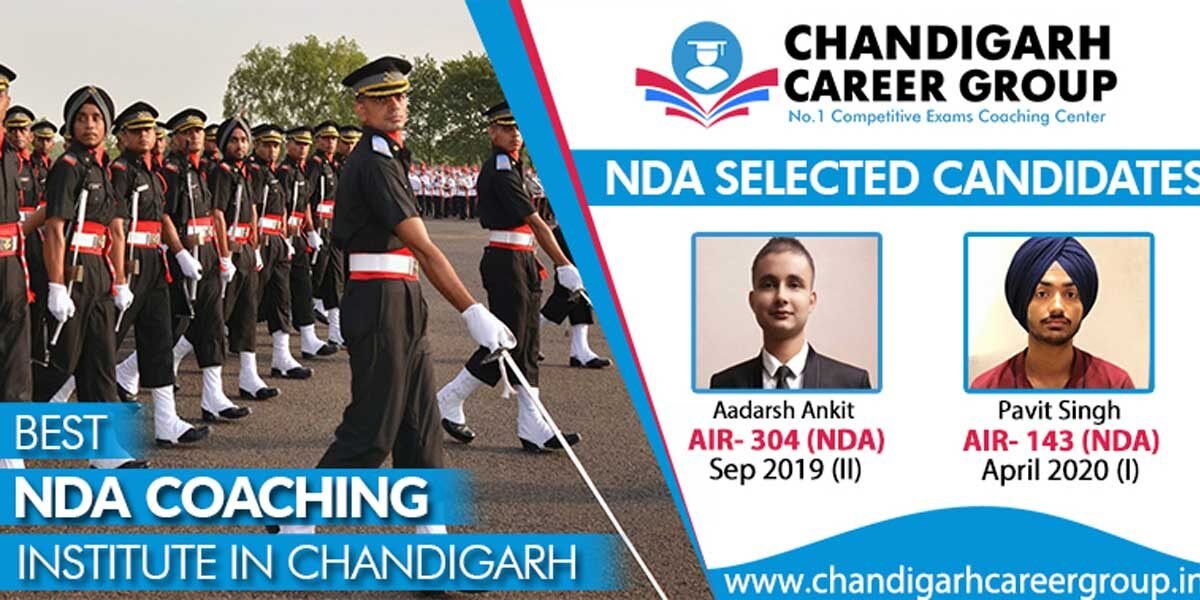 NDA Coaching in Chandigarh – If you aim to join the Indian Army immediately after the 12th and want to grow as an army officer, clearing the NDA entrance exam is the initial step. this exam has become competitive day by day and is held twice a year. it provides a well-paid career opportunity in Indian Armed Forces. Thus at present, it becomes one of the supreme entrance exams.

Chandigarh Career Group is one must probe the best and top NDA Exam Coaching Institute In Chandigarh. With our firm faculty, we are competent to get exceptional results in past years. we strive to fulfill the dreams of our students by offering the desired learning. and provide the most effective NDA Coaching in Chandigarh as we have the most qualified faculty with teaching experience of many years. To appear for the NDA exam an applicant has to undergo a two-stage selection process. One is a written exam, the other is an SSB interview.

We are the best North India NDA Coaching Center in Chandigarh and provide the Best NDA Coaching in Chandigarh to make your dream from vision to reality. The institute is becoming a top-notch professional, proficient, and leading career developer in the country. We are recognized for our exceptionally unique mentoring and high-quality education services in India. We provide students with the best guidance as a team of professionals & help students everywhere in India in clear NDA entrance exams. Chandigarh Career Group gives an ideal stage for encouraging students to clear the NDA entrance exam.

With an over 81% achievement record in NDA entrance, we provide an exceptional amongst the NDA Coaching in Chandigarh. Our NDA coaching classes follow an encircle learning outlook and go to serving the students in vast learning and growth. Founded in 2015, we have successfully located ourselves as the Best Coaching Institute for NDA exam in a finite potential to focus time. The Institute has built up a sense of proficiency in this field over the years.

Chandigarh Career Group offers the best NDA Coaching in Chandigarh. This is because it provides the finest quality of material and preparation at a minimum price. This is what makes our institute the most suitable place for NDA aspirants to start their preparation.

What is National Defence Academy?

NDA (National Defence Academy) entrance exams are conducted by the UPSC for the military, navy, and air force wings of the NDA. Candidates who wish to join the defence forces, such as the army, navy, and air force, may choose to take this exam. This is often a national-level test that occurs twice a year. In order to get a job in the military, NDA I and NDA II exams are required. Join Chandigarh Career Group Best NDA Coaching in Chandigarh.

Applicants must first take the National Defence Academy & Academy (NDA & NA) Examination. As a result of this exam, the applicant becomes eligible for the tests or interviews conducted by the Service Selection Board (SSB). UPSC is the only body to issue guidelines for selection and, as a result, to conduct the doorway test.

Eligibility for the NDA Exam:

1). Below is a list of the subjects of the written examination, the number of questions, and the maximum marks each subject is allowed.

2). Papers in all subjects consist of objective-type questions.

1). Filling out the Application Form: NDA application forms can be filled out online by visiting the NDA’s official website.  A few days after the closing of the application procedure, the Commission releases its list of rejected candidates. Join Chandigarh Career Group For the Best NDA Coaching in Chandigarh.

2). Release of Admit Card: Three weeks before the NDA exam, the admit card is released. The link to download the admit card will be available on the official website.

3). Written Exam: Candidates who register for the exam are required to appear for the written exam. The written test consists of two sections: Mathematics and General Ability Test. The total mark for the test is 900. If a candidate gets a minimum qualifying score on the written exam, they are invited to SSB Interview.

4). Declaration of Result:  Two types of NDA results are announced online: written and final. The written test results are announced first, followed by the announcement of the final result. The result is presented in PDF format. Next, it displays the roll numbers of qualified candidates.  Once the final result has been announced, the candidates’ mark sheets are released. After that, the candidates need to secure NDA cut-off 2022 separately in the written test and the SSB interview.

5). SSB Interview:  SSB Interviews are conducted for Intelligence and Personality. There are two stages to the process. All qualified candidates undergo a stage 1 test on their first day of reporting at Selection Centers/Air Force Selection Boards/Naval Selection Boards. If they pass the first phase, they advance to the second phase. Participants who qualify for the second stage must submit certain documents.

6). Final Selection:  Candidates are ultimately chosen to join the Army, Navy, and Air Force wings of NDA/NA based on their performance in written exams and SSB interviews. Finally, the final allocation will take into consideration applicant eligibility, medical fitness, and merit-cumulative preference.

Instructions before filling out the NDA application form:

How to Apply for NDA Written Exam?

Note: The UPSC NDA application form cannot be corrected after it has been submitted in its final form

Why Our NDA Coaching Institute in Chandigarh?