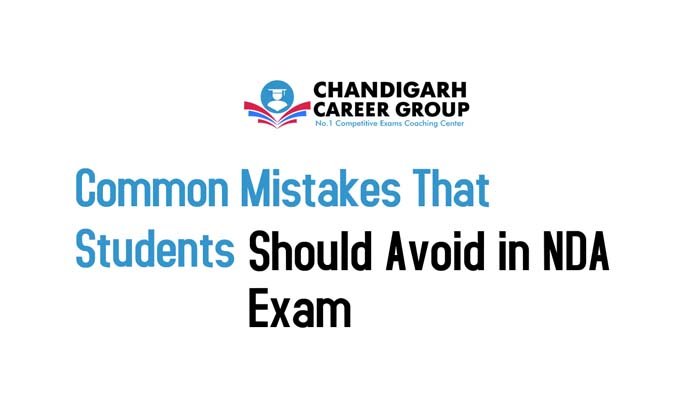 NDA exam is conducted by Union Public Service Commission for the purpose of granting admission to eligible candidates for the Indian defense services. There are quite a few candidates who can crack the Army, Air Force, and Navy entrance exams every year. Thus, obtaining a place on the UPSC NDA Merit List requires a great deal of effort and diligence. Making mistakes is an attribute. When mistakes are made repeatedly, it can interfere with the preparation strategy, resulting in poor performance during the examination. Therefore, you should avoid making silly mistakes because they usually benefit your competitors. Here is a list of the most common mistakes students make in the NDA exam that they should avoid. Join Chandigarh Career Group for NDA Coaching in Chandigarh

While preparing for the written exam, some candidates don’t make notes. Notes-making is an important part of the preparation for any exam, so this is a practice that should be avoided at all costs. To prepare for the exam, candidates should make small notes of everything they study.

Candidates often ignore revision. They only focus on completing the syllabus and skip revision. For any exam, revision is essential because it helps you recall what you studied during your preparation. Candidate should stick with one set of study materials, limit resources, and specialize in repeated revisions rather than running after a particular set of study materials.

3). Preparation without browsing the syllabus:

Many candidates fail to follow the syllabus prescribed by the conductor before preparing for the exam, so they frequently review unnecessary things and don’t cover the specified sections, leading to poor performance. Hence, candidates must familiarize themselves with the syllabus before starting their preparation.

4). Public knowledge is taken for granted:

Students who studied science in class 12 often believe they will pass the exam if they only specialize in science subjects and don’t concentrate on public knowledge, but these are the kinds of myths that result in failure. Public knowledge is just as important as other subjects. While preparing for the exam, candidates should aim to maximize their scores and avoid skipping any sections.

5). Mock tests are not attempted:

Many aspirants make this serious mistake. However, they do not attempt mock tests, which are very important, since they help you evaluate your preparation and plan how you will approach the test. Therefore, candidates should take mock tests alongside solving previous year’s question papers.